Welcome to Brewerton Fire Department Inc.  In August of 1920 a group of interested citizens under the leadership of J. Elet Milton and A. R. Merrit met to discuss the need for a fire department.  The response was so favorable that the meeting decided to organize at once.  Funds were solicited throughout the community and $1400 was raised.

From the funds an amount of $825 was allocated for the construction of a fire house to be built at the corner of Walnut and West Washington Streets.  The remainder of the money went for the purchase of two 45 gallon, hand drawn, soda acid chemicals.  The new apparatus was stored in the Milton Boat Yard pending completion of the fire house.

The first alarm system consisted of a 15 foot section of railroad rail, bent into a 'u' shape, suspended from two poles.  A 12 pound sledge was attached to the poles by a length of chain.  A hard blow on the rail could be heard throughout the community.

February 21, 1922 the Brewerton Fire District was formed by a vote of the community.  The new district was 1 mile square with the center of the rectangle being at the south end of the Brewerton bridge.  Bud Furnier was elected first Chairman of the Board of Fire Commissioners.

In May of 1921, James Kinne who operated the Washburn House purchased for the new fire department, two surplus steam operated pumpers that had been motorized for road travel, from the City of Syracuse.  Mr. Kinne was later reimbursed to the amount of $300 when funds were forthcoming to the new district.

February 1922, District voted to bond for the construction of two new firehouses, one for each side of the river to house the two new steam pumpers.  Also included in the bonding were funds for the purchase of 4,000 feet of hose to be used by the two pumpers.

During the next few years the steamers answered calls for help from a number of neighboring communities including: Central Square, Phoenix, Cicero, Constantia, and Parish.

in 1929 due to some internal friction the department was suddenly dissolved and all property turned over to the Fire District.  However; within three months a new group was formed, the incorporation papers were reinstated and new life put into the department.

To meet the growing demands of a growing community a second fire house was built by the department at the easterly end of Muskrat Bay Road.  The house equipped with a 750 GPM pumper and manned by nearby volunteers of the Brewerton Fire Department.

The Brewerton Ladies Auxiliary was organized in 1956 under the direction of Rita Ryder and has played an important role in departmental activities since that time. 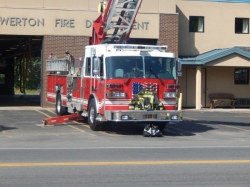 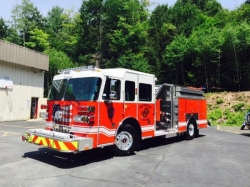 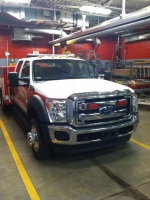 Copyright © 2006-2020. YourFirstDue Inc. All Rights Reserved. Designated trademarks and brands are the property of their respective owners. Content on this web site is supplied by Brewerton Fire Department Inc.. YourFirstDue Inc. cannot be held responsible or liable for any content, text, pictures, or any other media found on this web site. Maintained by the members and staff of Brewerton Fire Department Inc..
Management Login
Powered by